You do not have Javascript enabled. Some elements of this website may not work correctly.

Last month, CEA started Y Combinator. This has already had a very positive impact on the team. We’re getting a lot of advice and attention from the partners, and we’re feeling excited about building CEA.

January has been our best month ever in terms of growth of Giving What We Can pledgers, in significant part because of the pledge drive, with 199 members.

We wrapped up our fundraising drive, raising $2 million. We are also in the process of applying for a grant from Open Philanthropy, and some donors are waiting until we hear from them before deciding where to donate.

This month we also had some significant criticism, confusion and discussion about effective altruism in general, and Giving What We Can Pledge in particular. In response, we’re going to try to be more communicative and transparent with the effective altruism community. Julia Wise has written a post clarifying the Giving What We Can Pledge; I’ve written a little about what CEA’s next big product will be on the forum. I intend to write more to explain what CEA does and why in the future. 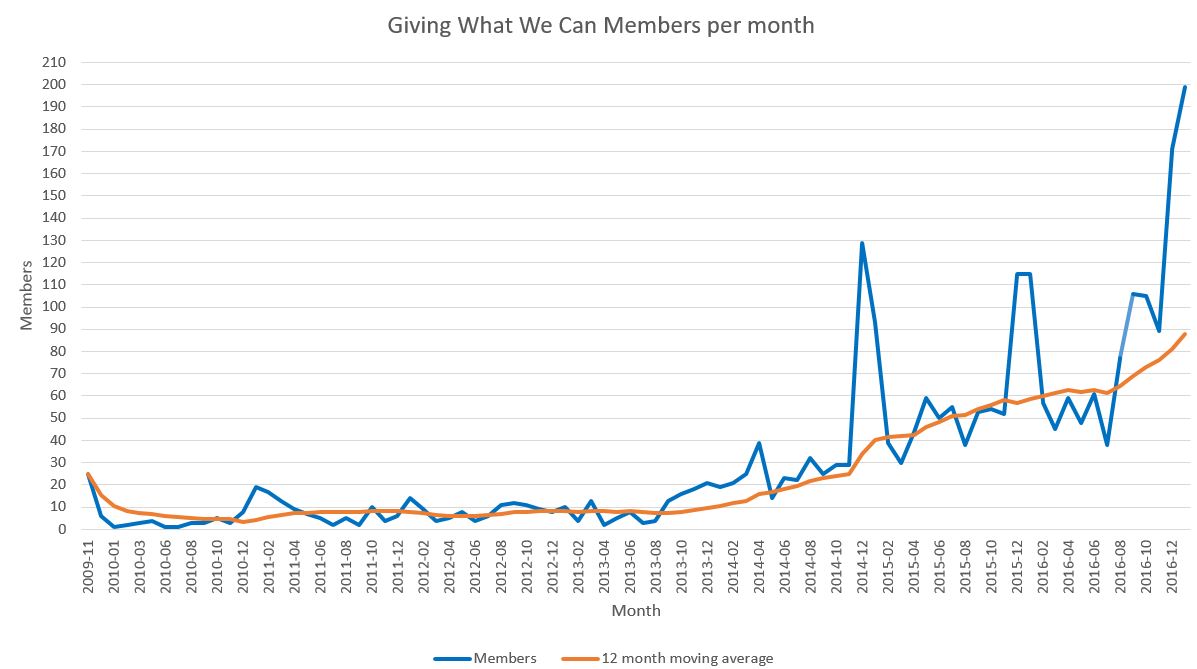 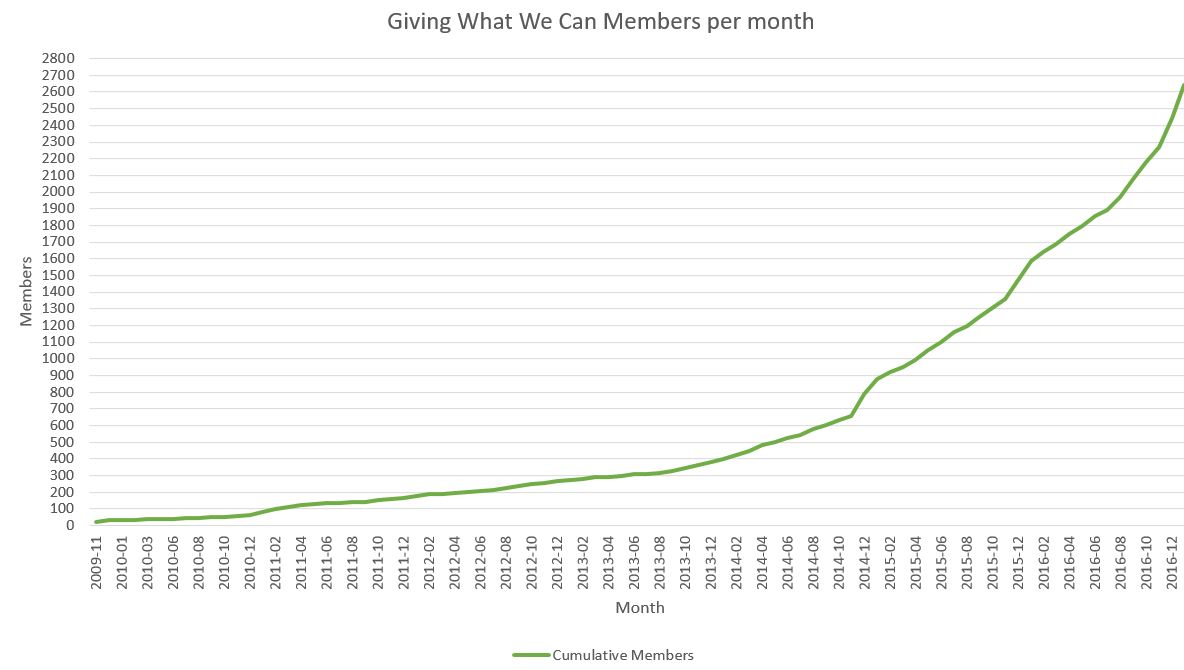 We’re currently moving over to a new accounting system and are in the process of applying for a grant from the Open Philanthropy Project so we’ll be able to share more financial data in the next few months.

Below are brief descriptions of the work from the different teams within CEA over the past month.

The Online Infrastructure and Marketing Team are all in the US for Y Combinator. They are are focusing on money pledged in the first year as their main metric (as suggested by Y Combinator) as well as continuing to support the community. For this reason, they’ve focussed on the pledge drive (resulting in 318 new members), conversations and interviews with the community and significant work to improve our website infrastructure (including, for example, the pledge sign up form). We hope these improvements will create a better user experience for the community and give us better access to data on our different activities.

EA Global conferences are one of the main ways we support collaboration in the community. For this reason we published this short update to let the community know we are moving the EAG 2017 Boston event from May to June to ensure as much participation as possible.

As a reminder, this makes our current plans:

We’re conducting site visits over the next week and so expect to have more concrete dates before next month’s update.

EAGx events remain an important way of not only connecting the community but also finding talented and promising members of the community to be the organisers. This month we have spent working on the remaining three conferences from the first application round (in Madison, Philadelphia, and Washington, D.C.), as well as restructuring EAGx based on the feedback we received throughout the inaugural year. Roxanne Heston has officially started working in the Executive Office, so EAGx will now be under the direction of the Events Team, allowing us to better integrate all of our events.

Chapters proved important in getting new pledges during our pledge campaign, with 51 people citing Chapters as where they first heard about Giving What We Can. We are currently reviewing how best to support Chapters and have been evaluating their impact following on from the groups’ responses to the Winter Termly Review.

The Executive Office is a new team dedicated to managing the office of the CEO. Will is not only the CEO at the Centre for Effective Altruism, but is recognised as a public intellectual and leading figure in the effective altruism movement. Due to his rapidly expanding profile and responsibilities our purpose is to facilitate communication between Will, CEA and the outside world, devise strategy to help maintain and grow his influence, and manage his schedule and social media presence.

In addition to Will, this team consists of Emma Gray, Executive Assistant, and Roxanne Heston, Press Officer. This month they have been mainly focused on setting up the processes for the new team and helping to devise strategies to help build Will’s influence and connections. They have also been focused on freeing up more of Will’s time so that he can dedicate more of it to writing.

One of our top priorities this year is to narrow the focus of the research projects currently housed in this division. Over the past month, we’ve made progress in that direction. We are working closely with the Future of Humanity Institute to identify ways to better integrate its research with CEA’s and, soon, that of the Oxford Institute for Effective Altruism. Seb Farquhar, who led our policy advising work, is moving across the hall to the Future of Humanity Institute, where he will continue his work on existential and technological risk policy. We are also in discussion with Founders Pledge and GiveWell regarding whether some or all of our philanthropic advising team should move to those organizations.

A few specific highlights from the past month: